The big news of the week was how Bruce Jenner turned into a woman.  Well not exactly turned into as that sounds like a frog turning into a prince. More like had a medically induced sex change.  Because I’m a naturally curious person, especially when it comes to stuff like this, I had some questions that only Caitlyn Jenner would be able to answer.

We all know that Caitlyn was a normal macho, olympic-gold-medal-winning man named Bruce.  I am sure he had thoughts of the opposite sex. Well duh! He was married to the opposite sex!  Now my question is this, does the surgery also alter the way one thinks so he or she no longer thinks the way they did as a man or woman?  For instance, if the surgery is only skin-deep and Caitlyn’s mind is still the same mind she had prior, does the sight of her female organs turn her on? Would she sit and play with them for hours? Like rub her boobs and vagina? Just wondering. I probably would.

Another question is this, going with my hunch that the mind remains the same after the surgery, how would Caitlyn feel the first time she’s hit on by a guy?  Would she forget that he is now a she and slug him for suggesting he’s gay? How do you go from liking women to becoming one?  Does it mean the person had to be a closet gay all along? Was Bruce gay? If so, then disregard all the above and pardon my ignorance. I am as confused as a man living in the body of a woman. All the he to she and vice versa is making my head spin.

Note: I don’t think I can handle being a woman for a day, I might rape myself.  Just think, the thing you spent all your life chasing, now attached to you permanently? At your own disposal? Bruce, you lucky dog! Good luck with Caitlyln. 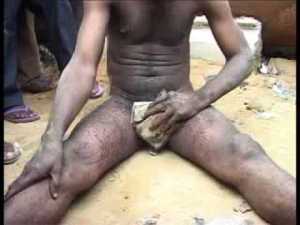 Hey, did you guys hear about that guy who tried to jump out of a two-story building in trying to commit suicide? Yep. Well let’s break it down here, a fricking two-story buddy??  Come on man, I know you are a rapper and not expected to be smart but come on. You didn’t want to die did you?  The worst that could happen in that short fall was you become a cripple, you lose a limb or get a concussion.  You won’t even hurt your pee pee in such a short fall. Um…not so fast…continue reading.

Andre Johnson, a Wu-Tang-Clan (Old Hip-Hop group) affiliate, tried to kill himself a few days ago by jumping from a two-story building.  The fall did not come close to killing him but the Gods realizing what a dumbass he was decided to get teach him a lesson he won’t soon forget.  To help him realize that things are never as bad as they seem, they inflicted on him one of the most embarrassing injury.  The lost of his manhood.  Everyone knows that rappers like to brag about their sexual prowess, now we would know he is lying when and if he sings about boning hot chicks.

I tried to no avail to find out how his pee pee got severed. How do you jump off a balcony and sever your penis? Yep, the Gods had a hand in it. Now poor Andre, also known by his stage name Christ Bearer, has a cross of his own to bear.   He down wid No Pee Pee? Yeah you know me!  At least he, wait for it…had the balls to jump. I am sorry! Ok I said I am sorry!

On a serious note:  Suicide is never the answer. As in this poor fella’s case, things could always be worse.  Oh, and there are a lot of smart rappers. I liked Amanda Bynes as an actress.  I thought she was cute with a little bit of the ‘girl next door’ in her.  Such an innocent little darling.  A lot of guys secretly hoped to see ‘more of her’.  Men are like that.  They see a pretty face and they want to see ‘more’.

Well wait no more.  Amanda has been tweeting topless and almost bottomless pictures of herself.  The only problem is, they are cringe worthy.  Not dissing her body or admitting that I too have pored over them either but  the manner in which they were presented would completely kill any boyish excitement one may have had.  Kill the mood sort of.  Here is a woman, yes, she’s no longer a little girl, she’s almost 30! obviously lost in a state of mental confusion, self-induced or otherwise, exposing herself to the world.  To me, that’s like seeing a mentally deranged woman naked.  Yes, I know that might still be a turn-on for some   but there’s a name for those ‘some’.

Seeing uncovered parts of sexy celebrities such as Britney and Rihanna was maybe a dream for a lot of us guys until their nude photos were splashed all over the internet, quelling the mood like a cold shower as it became apparent that we were looking at the photos of sick and messed up people.  To be caught looking at them for gratification now seemed like a sick practice.  Something like taken advantage of the disabled.  Which it is in some way, right?

It’s good to see that Britney seems to have gotten over whatever she was going through.  Maybe Rihanna, Amanda, Lindsay and other celebrities hogging the news for the wrong reasons could get over their demons also and one day we could at least enjoy seeing them sans bras without feeling guilty or sick.

Blogger’s note:  Posting racy pics of yourself online is an advertisement for attention, even though I can’t imagine with millions of followers and fans, how much more attention do these attention-hogs need?