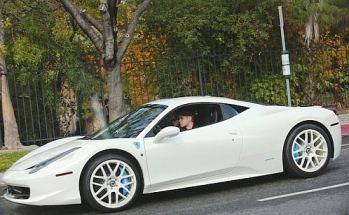 Justin Bieber was recently investigated for allegedly driving into a reporter.  But thankfully the investigation never got past, “Hi, I am a police officer and you are?”  The LAPD said there was no crime as apparently reporters are a dime a dozen and highly disposable.

Los Angeles police say Justin Bieber struck a pedestrian with his car in Hollywood Calif., on Monday night, but there was no crime and the injuries aren’t life-threatening.

See? The LAPD said there was no crime.  Just like there was no crime in giving Rodney King the beat down of his life.  The reporter was lucky not to have been charged for impeding Justin Bieber’s progress.  Or for walking into the projected path of a FERRARI driven by a teen heart throb.  Hello! We are talking about a ferrari here, not some Mustang or Honda Civic.  Come on photogs, give the guy some space.  It’s Bieber, man!  BIEBER! He hits you, you say sorry and check his car for damage which you promise to fix.  There ain’t no law that applies to the Biebs.  Belieb that.

Just a few months ago the same ferrari was involved in an accident in which a man was killed.  Yes, he was a reporter.  Justin Bieber wasn’t in the car at the time.  Well unless he was whisked away immediately.  So don’t even try to pin that on the kid either.

I don’t get how former NFL star, Keyshawn Johnson could accuse Justin of reckless driving.  Hate much?  Even some of Biebers neighbours, well make that all of his neighbors, are joint accusers.  Envy much? Those envious and jealous so and so!  Just wait till the Ferrari gets them…